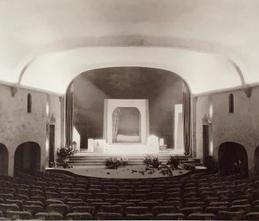 Rediscover the epicenter for creativity in Carmel and the dynamic man who created it.

The original Theatre of the Golden Bough was founded, built, and directed by Edward Kuster in 1924. The theater was a Carmel cultural landmark, and who better to recount its history than the founder’s daughter, Marcia Kuster Rider. The Golden Bough offered a staggering 50 productions a year and was the epicenter for creativity in Carmel during the Golden Era years of 1924-1935. It drew national as well as international attention and became known as an important proving ground for both actors and playwrights. This talk, illustrated by photographs, will highlight the theater as well as the dynamic man who created it.