An Evening’s Conversation: Ernest Hemingway and Traveling the World Community Night with the Library 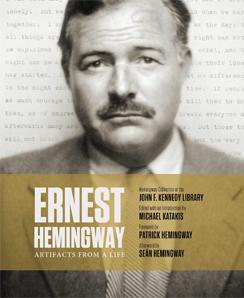 Join Michael Katakis, internationally acclaimed photographer, author and manager of Hemingway’s literary estate. His work has been translated into several languages including Greek, Bulgarian and Chinese and his photographs have been collected by institutions including the National Portrait Gallery in Washington D.C., the Victoria and Albert Museum, the British Library and Stanford University’s Special Collections Department.  He was elected Fellow of the Royal Geographical Society, and was Presented to Her Majesty, Queen Elizabeth. in 2011. In 2012 he was appointed Ambassador for the British Library and elected Director of Americans for the British Library.

Mr. Katakis is also the international manager of the Ernest Hemingway literary estate, and his most recent book, Ernest Hemingway: Artifacts From a Life provides an illuminating story of American icon Ernest Hemingway’s life through the documents, photographs, and miscellany he kept. Mr. Katakis’ other books include; A Thousand Shards of Glass: There is Another America (Simon and Schuster, UK 2014), (Traveller: Observations From an American in Exile (Scribner, New York 2009), The Vietnam Veterans Memorial (Crown, New York 1988) which is a two year study of the emotional impact the memorial has had on its visitors. Sacred Trusts: Essays on Stewardship and Responsibility (Mercury House, San Francisco 1993). Excavating Voices: Listening to Photographs of Native Americans (University Museum Publications, University of Pennsylvania 1998) and the limited edition book, Despatches  Foolscap Press, Santa Cruz, California 2008) which a number of institutions such as the Victoria and Albert Museum and Stanford University have acquired for their special collections.